T'ings to Know
BEACH SAFETY:  NO BEACH HAS LIFEGUARDS!  YOU ENTER THE WATER AT YOUR OWN RISK!
There are creatures, both large and small, in the water that can hurt you.  Don’t wear anything shiny.  Fish that like to eat other fish may come and nibble or take a bite out of you.
If you can’t swim, you shouldn’t go in the water on the Atlantic side over knee depth.  Because of usually calmer conditions on the Caribbean side, waist depth only.
On the Atlantic side, never turn your back to the ocean, or if you have to, constantly look over your shoulder to be on the lookout for a rogue wave.
Always scan the water for the presence of sharks, barracuda, or rays.  Most people think of sharks as presenting the greatest danger.  However many of the Long Islanders that I’ve talked to consider ‘cuda the greater threat due to their unpredictability.  If you see more than two ‘cuda together, time to get out.  As for sharks, its very common to see a shark or school of sharks in very shallow water very close to the shore.  These probably are nurse sharks.  April through June is their mating season, so you may find them doing so in very shallow water.  Lemon sharks are also another common shark that you may see in shallow water.  Although both are nonaggressive, be respectful of them and give them a wide berth.  Rays generally aren’t aggressive, but as they like to settle into the sand, often in the shallows, it’s possible to inadvertently spook them.
Always have a companion if you are actually swimming (as opposed to walking or wading).
If you’re going to a beach by yourself, let someone know your expected return time.  And carry a cell phone, just in case.
Back to Top
BEACH ETIQUETTE  Some simple rules/guidelines.
The beaches aren’t yours.  They belong to the people of the Bahamas.  Respect them - both the beaches and the Bahamians.
Don’t litter.  Take in, take out.  There’s enough junk coming from passing ships.  You don’t need to add to it.
One of the pleasures of these beaches is that you rarely will see anyone on them.  If you do, respect their privacy.  Don’t go running towards them and accost them with “What are you doing here?”  However, we did have occasion on one very deserted beach to have a couple rapidly walk towards us and say “We haven’t seen anyone in five days.  So glad there’s someone to talk to.”  Perhaps we saved a marriage!  A simple nod of the head or “Hello” is generally all the acknowledgment required.
Although the beaches are public, the roads leading to them may not be in a strictly legal sense that you may be used to.  If a road leads directly to a house that is on a beach, it has not been included.
Long Islanders are a socially conservative group of people.  If you want to recreate the beach scene from “Here to Eternity”, the sea captain being welcomed home by his wife after a long voyage, or a pirate pillaging a wench, BE DISCRETE.
As to beach attire, or lack thereof, again, discretion and modesty are advised.   If you want to go sans suit, something actually forbidden in the Bahamas, don’t get out of the water in someone else’s presence.  If on the beach, make sure you can cover up quickly.  For women, modest bikinis should be worn.  A simple but somewhat crude test:  other than legs and armpits, if it requires shaving to be worn, don’t wear it.  And for men, know that speedos sometimes raise eyebrows.  And please, if you look down and only see your stomach, stick to trunks.  As a recent Facebook post noted: “It gets hot in the Bahamas. Dress for the body that you have, not the one you think you have.”
Back to Top
BEACH BAGS
Everybody needs at least one!  But what to pack?  I’d suggest these essentials:

-  Sunglasses to further protect the eyes.  Polarized ones preferred as they cut the glare and allow you to see into the water.  There are various tints depending on what you are doing.  Blue is generally recommended for beach, sun, and water.

-  Anything nonalcoholic to drink.  Water preferred.  Although the ocean's water and breezes may make you feel cool, you can lose more water than you realize.  Drink plenty of fluids.  Ice not necessary.

-  A light colored, loose fitting top, shirt, blouse, cover-up.  Although many people use t-shirts, t’s generally aren’t loose enough to allow air to circulate over the skin.  Not only will a top of some sort  help protect you from the more intense sun, but if its windy, you may feel chilly and need it.  And wind blown sand is very abrasive.  Loose fitting pants are optional.  Cotton is the fabric of choice for shirts;   A quick dry fabric for pants and shorts.

-  Something to carry beach treasures.  A mesh bag that allows sand to drop out but not your treasures is ideal.

After that, it pretty much depends on what you want/like to do, such as:

-  Swimsuits.  These can be worn to the beach or taken with you.

-  A ‘crabbing’ net.  Essentially a mesh bag on a pole so you don’t have to go underwater if you happen to be wading and want to get something.

And an item that won’t fit into your beach bag but is highly recommended, particularly for those a bit less nimble:  a WALKING/HIKING STICK! The nice thing is, you can get one for free on your first walk on the beach.  You’ll find them invaluable for getting up or down dunes or across longer stretches of rock.
Back to Top
BEST BEACH GOING TIMES
ANYTIME, except possibly from 11am-2pm during the summer months of June-August.  Some might say May-September.  The sun is quite intense during these months, island temperatures are at their highest, and winds at their lowest.  And of course swimming at night isn’t recommended.
If you are planning on going into the water, timing will also depend on the specific beach and the tides.  Be sure to check the tide tables particularly for Atlantic side beaches.
Back to Top
SHOES
These are not resort beaches.  They are not groomed.  There are no well maintained paths to them.  You may be walking over grass, sand, small pebbles, sharp stone, flat rock, broken glass etc, not only to get to a beach, but also to walk on it and also in the water. Some sort of shoe is a MUST!
Be aware of this small weed called the sand spurrow (hat tip to Locksley Cartwright for name and photo).  It has a very nasty nettle like seed on it that attaches to EVERYTHING.  Although small, the barbs are particularly painful if you step on them.  They can easily break off and remain in your skin.  There is an art to removing the seed that minimizes the pain without leaving any piece in you.  Trust me, it won’t take long to learn how to do this. 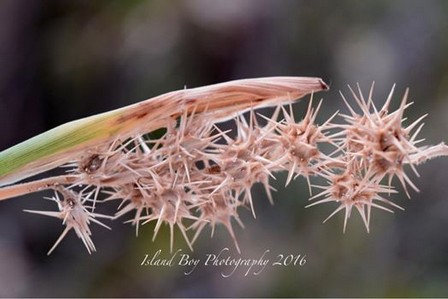 Jagged limestone, Roses, Long Island, Bahamas
Walking over the common jagged limestone found on Long Island requires care.  It is very sharp and a fall can result in very serious injury.  Shoes are absolutely essential for getting over this rock.  I’ve found that my water shoes provide adequate protection for small sections if I carefully choose where to place my feet.  However if you are planning on hiking over long stretches of this rock, a much sturdier shoe is required.
When in the water, if you can avoid it, do not walk on active coral heads or reefs.  These are living and fragile ecosystems.  For adults and teenagers, water shoes are highly recommended (see photo for example).  For small children and those up to maybe 12-13, a cheap pair of sneakers (ones that you don’t mind getting wet) might be a good option.  Flip flops should not be worn at all.

For those that might want to climb a promontory to get a better view, if you have never climbed before, don’t start now. And you probably aren’t wearing a shoe made for climbing this type of terrain.  Many are steeper than they appear at first.  Ground conditions are variable from loose sand to jagged limestone.  Paths are likely nonexistent.  To survive in the salt environment, vegetation is much tougher and can scratch and cut you.
Back to Top
"The Beaches of Long Island"
by Phillip 'Doc Fig' Figdore
copyright 2018, all rights reserved
Back to content